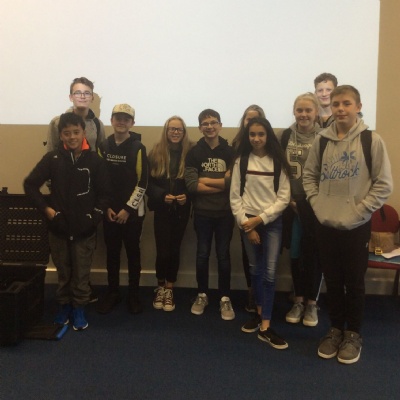 A team of Year 8 and 9 Lead Learners went to Gryphon school in Dorset to take part in a challenge day run by South West Academies Group (SWAG).

Here's an overview of the event by two of our students, Amelia Bowen & Shannon Pratt:

'Today we went to Dorset to participate in a range of activities. We were told it would be educational tasks that we would cooperatively work on with other students from across the South West region. When we arrived, we were organised into groups with unfamiliar people, and did a starter task of getting to know each other. We were both a bit nervous before going in, but soon got used to it. After we were told what the tasks were, we had an hour to complete as many as we could, trying to score the most amount of points. After this activity, we made a presentation on a randomly chosen topic and had an hour to put it together. Finally, we completed the research and presented our information to the other pupils. We both enjoyed the opportunities given to us and look forward to doing other ones again.'